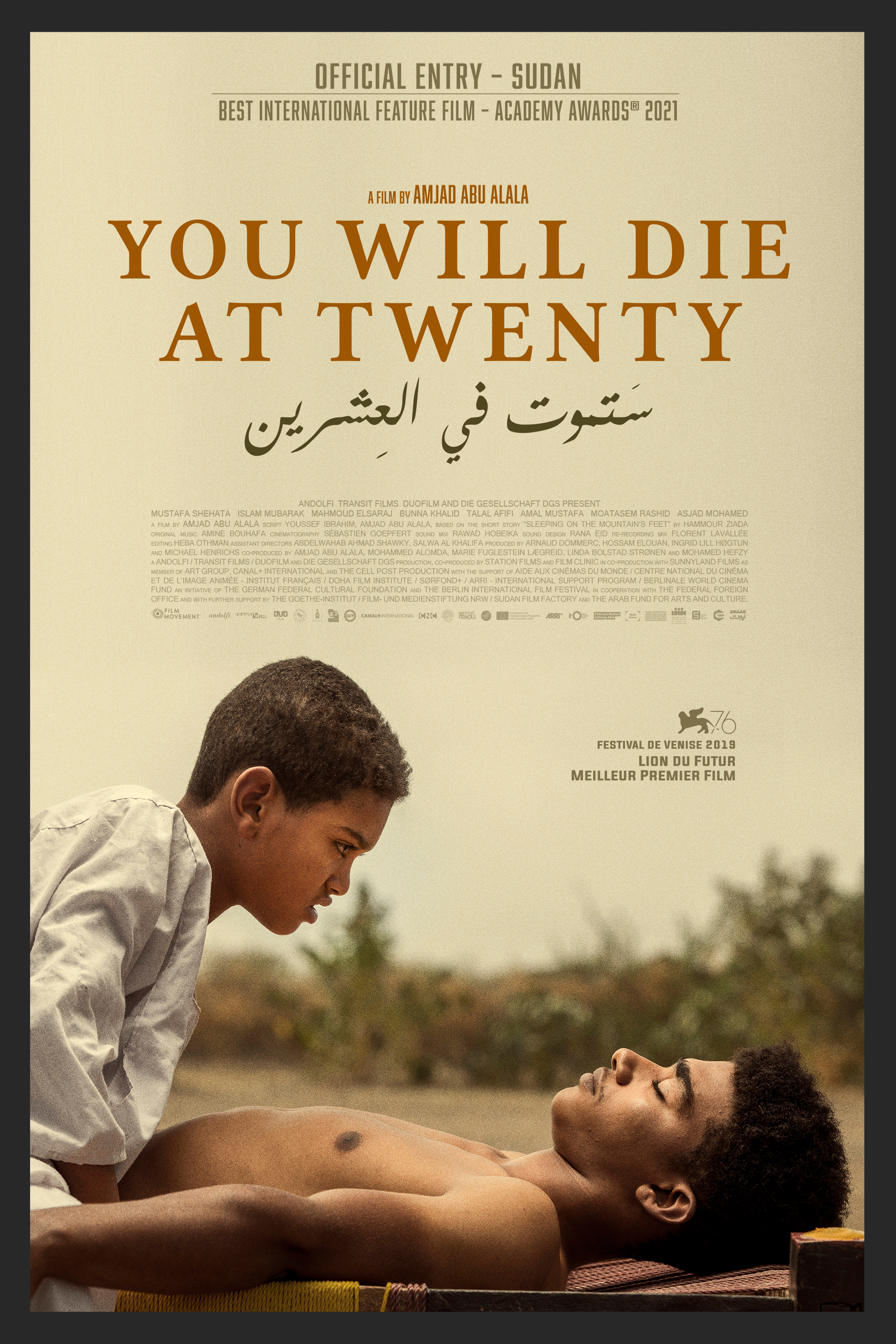 You Will Die At Twenty

Oscar Submission (Sudan). Winner of the Lion of the Future Award for Best Debut Feature at the Venice Film Festival, YOU WILL DIE AT TWENTY is a visually sumptuous coming-of-death fable. During her son’s naming ceremony, a Sheikh predicts that Sakina’s child will die at the age of 20. Haunted by this prophecy, Sakina becomes overly protective of her son Muzamil, who grows up knowing about his fate. As Muzamil escapes Sakina’s ever-watchful eye, he encounters friends, ideas and challenges that make him question his destiny. Sudan’s first Oscar submission, YOU WILL DIE AT TWENTY is an auspicious debut and a moving meditation on what it means to live in the present. Directed by Amjad Abu Alala (Sudan, 2019, 102m)

"Critic's Pick! In his debut feature, Amjad Abu Alala deepens a fable-like premise into a lyrical confrontation with the certitudes of faith and the life-giving powers of doubt. [T]he movie’s ravishing compositions imbue the setting with the shimmer of myth. Dust-flecked beams of sunlight slice through shadows; green-robed dervishes glide down the Nile in boats; the turrets of a mosque pierce a startling blue sky. Avoiding didactic conclusions or pat answers, Alala’s film questions blind belief but finds boundless enchantment in every frame." - Devika Girish, The New York Times
"A complex, stunning and sophisticated debut feature from Amjad Abu Alala and a major achievement for Sudanese cinema." - Mina Takia, AwardsWatch
"Amjad Abu Alala and DOP Sébastien Goepfert have created one of the most visually striking movies of this year." - Pramit Chatterjee, Mashable India
"Critic's Pick! The visual assurance of “You Will Die at Twenty” is the most immediately notable element of Sudanese director Amjad Abu Alala’s accomplished feature debut. Beautifully composed and boasting the kind of sensitivity to light sources and color tonalities usually ascribed to top photographers, the film lovingly depicts the remote east-central region of Sudan as a quasi-magical place of sand, sky and the colors of the Nile. " - Jay Weissberg, Variety
"[Alala] sharpens this fable-like coming-of-death tale into a moving commentary on unwavering compliance; a clear portrait of Sudan during its 30 years of authoritarian leadership. Thoughtfully ominous, the feature makes both an emotional and visual imprint...." - Sarah Ward, Screen Daily